Henry in the Woods 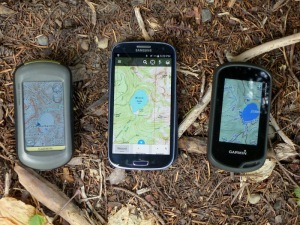 A lot our adventures leave developed trails and follow informal boot paths, or sometimes no paths at all. Our terrain is frequently heavily wooded or high relief, so that visual navigation is restricted. We use our GPS’s a lot.

I have always used a handheld Garmin unit.  But lot of my friends have switched to GPS applications on their smart phones.   I wondered if I was missing something.    So this spring I put the smart phone GPS app approach to some real world testing.Some of my climbing/scrambling partners are committed “I-people” and packed Apple smart phones loaded with a GPS app – GaiaGPS. In the field my Garmin Oregon 400i experienced fewer losses of signal and might have been slightly more accurate. But the I Phone screen was bigger and the display was easier to use.

One of these friends even did a presentation on the advantages of the smart phone GPS approach. I had to admit there were some advantages. Multiple map backgrounds were available, some of which were open source, dynamically updated by users. Newer phones have GPS receivers that see Russian satellites as well as US ones. If you carry your phone in the woods, you save the weight of a separate GPS unit. Battery life is at least as good. I needed to try this.

My smart phone is an Android Samsung Galaxy SIII. GaiaGPS for Android costs $19.95. I downloaded it and gave it a try.

My first tests were positive with some drawbacks.  Accuracy was good and the larger smart phone display was nice. While my Garmin logged total elevation change for both ascent and descent, GaiaGPS seemed to record only ascent. Furthermore, the total didn’t seem to match reality very closely – not a big deal, but disappointing.  Initial satellite acquisition took longer than I was used to with Garmin units. The phone display washed out in bright sunlight. Also the Samsung phone is not as waterproof as the Garmin units, so I needed an additional cover.

But then the real problems started to emerge. When my phone got cold (30’s probably), the application would lock up. I could usually get it restarted, but this was not acceptable for critical navigation gear. I finally went back to the Garmin Oregon 400i for consistent performance.

Almost right away, REI offered me a screaming deal on a Garmin Oregon 600. With a dividend balance begging for use, I upgraded. Now I have Russian satellites and a fully dynamic, smart phone like touchscreen. The display is great, readable in all lighting conditions, even if slightly smaller than a smart phone. Accuracy is really good. All in all, this is the best Garmin unit I have used.

So why did the GPS app on a smart phone not cut it? I suspect the fault lies in the phone, not in the app. My feeling is that the GPS receiver system in the phone is not up to modern Garmin performance. That might also be the temperature sensitive part of the system. As I migrate to a newer Samsung unit, I will test the application again to see if a better phone makes a difference.

I downloaded a demo version of another, cheaper app (Backcountry Navigator) to check it out. It appears equivalent to GaiaGPS. Both of these apps offer CalTopo as a background which is a good reproduction of current 7.5′ USGS topo maps. But the Garmin compatible Northwest Topo from Switchbacks provides a more detailed zoom of contour lines and includes most existing trails.

So what are the lessons? What should you choose? Having only to carry one device is an advantage. The phone GPS apps are good, with a lot of available maps. But you need to check the underlying performance of your phone.  If you have special needs, the app might not fill them, but apps offer other features, not available on Garmin units. Garmin units are not cheap, even on sale, and you probably already own the phone anyway. Garmin handhelds are tougher than most phones, but the gap is narrowing. It is cheap enough to try out the apps on your phone.  Test driving a Garmin handheld is more difficult.  Maybe your friend has one.  For me, for the moment, the Garmin 600 wins.  I accept the extra weight, and gain new navigation redundancy with my smart phone as a backup GPS system.

One thought on “GPS trials”

I started this Blog to share my solutions to lighter weight backpacking and to join the online ultralight discussion. I have traveled outdoors by foot, kayak or canoe for a lot of decades and in a lot of places. Gear has evolved and I find that I can comfortably pack with weights I could not have imagined years ago. A lot of my solutions involve MYOG projects or customizations. I hike mostly in the 3 season, mountain environment of western Washington State and try for a “comfort light” base weight of about 15 lbs.

If you are a new visitor to this site or new to the subject matter, check the Table of Contents tab above for early posts covering the basics of comfort light packing.